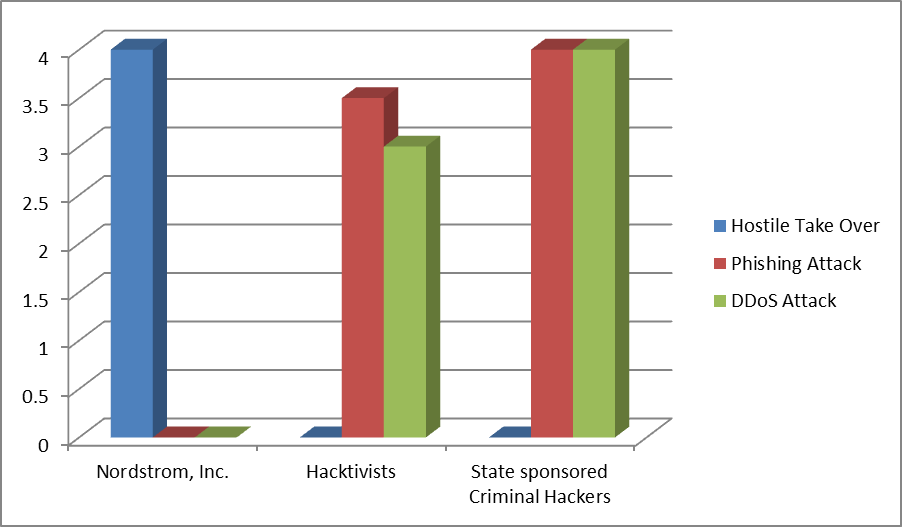 The chart above depicts the threat assessment for the three most likely attackers and their most likely course of actions.  The Nordstrom, Inc. most likely course of actions would not be a malicious cyber-attack; rather they would out spend our company and possibly buy out the company through legal means.  The Hacktivists most likely course of action would be a DDoS style attack by way of social engineering phishing attacks.  This is highly likely since Hacktivist organizations, like Anonymous, have declared DDoS attacks as a legitimate form of protest.  The State sponsored criminal hackers represent the most dangerous course of action against the company.  The sheer amount of resources that a State sponsored cyber-attacker has can potentially cause unrecoverable damage to the company.
For the company to be fit to defend against a malicious cyber-attack we must take a proactive approach to cyber threat intelligence.  This can be achieved through three steps: First, create intelligence requirements that will optimize our company’s operational security controls.  Second, conduct a gap analysis on existing security operations capabilities, talent levels, and collection capabilities.  Third, employ a “red team” to investigate the exposure the company has to adversaries on the internet.
The key principles and best practices that will need to be implemented include building a staff with the ability to attend to the details while at the same time see the big picture.  The staff will not need to be large, perhaps a dozen personnel, but they will need to be detail oriented.  They will need to be able to identify vulnerabilities like outdated software.  They will also need to have a grinding work ethic that will allow them to actively search out and plug holes in the network.  The team will need to understand the cyber intelligence mission and have a passion for the work.  The company will also need a “red team” to investigate what our company looks like to different adversaries.  This “red team” will need to search to understand what our company’s threat exposure is on the internet.  Intelligence requirements will need to be created to be used to operationally map security controls and provides the required decision support to help the analyst do their job more effectively. (Brighttalk, 2017)
Cyber intelligence analysts will need to triage the threats into categories so that the most dangerous threat receives attention first and the least dangerous threat gets places toward the end of the list.  The cyber intelligence analysts must know and understand the intelligence requirements that have been created to help drive there collection.  In the analysis phase, a gap analysis will need to be conducted on our existing security capabilities and the collection capabilities.
Resources that will be required to defend against a Dyn DDoS style attack will include ensuring proper server configuration, DDoS mitigation appliances, an intrusion detection system, and black-holing as a last resort.  By ensuring that at least one member of the staff is proficient in server configuration, it will help mitigate the risk of a DDoS attack on the company.  DDoS mitigation appliances are dedicated to sanitizing traffic on the network.  This capability along with an intrusion detection system will provide some anomaly detection capabilities.  If all else fails the staff can fall back on black-holing.  This approach takes all traffic and diverts it to a black-hole, where it gets discarded.  The down side is all traffic – good and bad – gets dropped.
The company will need to implement a mandatory employee training program that will focus on safe computing in the workplace, safe computing at home, and information assurance.  The cyber-attack on Yahoo began because a Yahoo employee opened an attachment or clicked on a link in an email from an unknown user.  Once the employee clicked, the malicious package was delivered and the exploitation phase of the attack had begun.  If the company places an emphasis on employee training on how to spot potentially malicious emails we can prevent a Yahoo style attack.  The company will also need to invest in a Next-generation firewall, application firewall, and an IDS/IPS system.  Prioritizing patches and triaging threat alerts will help mitigate further network vulnerabilities.
To assist in mitigating risk to the company’s IT infrastructure and promote a robust approach to cyber threat intelligence the company will require a cyber threat intelligence product that takes a holistic approach to cyber threat mitigation.  The cyber threat intelligence product that I have chosen for the company comes from a well-respected defense industrial base company with roots in San Diego: SAIC.  SAIC provides an end-to-end solution that meets current and future cyber life cycle management needs.  SAIC calls this product CyberSecurity Edge. (SAIC, 2017)
CyberSecurity Edge utilizes non-intrusive penetration tools that can find recently exploited threats and vulnerabilities, as well as cutting-edge automated scanning tools.  The SAIC staff can work on-premises, off-premises, and in hybrid environments to train our employees on the CyberSecurity Edge system.  The cybersecurity review processes, procedures, documentation, and physical and personal security are included in the assessment phase.  Their implementation process will alleviate the need to completely change our infrastructure. (SAIC, 2017)
The Total Cost of Ownership will be dependent on the technology requirements necessary to meet our business goals.  SAIC will customize a “pick & play” solution to meet our company’s needs based on the level of risk to the company’s IT infrastructure that we are willing to take.  After implementation, SAIC will continue to manage the security plan set in place from the SAIC Secure Operating Center or they can provide certified personnel to complement our cybersecurity staff.  Through this tailored plan we will have the ability to save money by choosing only the capabilities that we need and avoid the extras that are not needed. (SAIC, 2017)